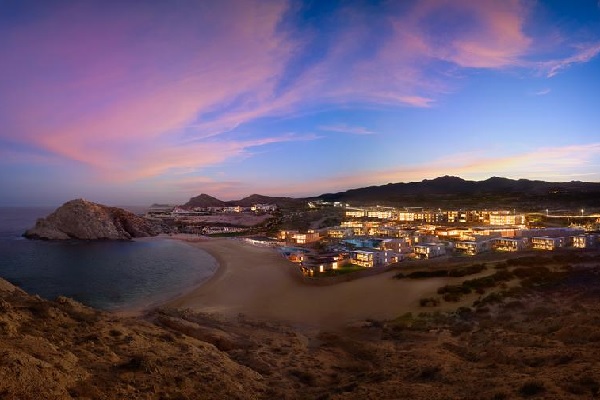 If beauty and tranquility are what you seek, then make Montage Los Cabos your next destination.  So, imagine standing on your own private terrace, a glass of wine in hand, looking out over the tranquil Sea of Cortez.  First, you notice how the sunset paints the sky with streaks of pink and orange.  Then, you feel the romance in the air as you gaze upon the horseshoe-shaped Santa Maria Beach.  You see a happy couple walking on the beach while the sky begins to darken.  What a wonderful place to be!

Montage Los Cabos is part of the premier, master-planned community called Twin Dolphin.  It’s located on the site of the former iconic Hotel Twin Dolphin, which was one of the first luxury hotels in all of Los Cabos, Mexico.

Built on a 160-acre land parcel, the original Hotel Twin Dolphin was located along Santa Maria Beach.  This once-historic hotel was developed by a Texas oil tycoon named David J. Halliburton Sr.  He opened it back in 1977, once it was completed.  And, he named the hotel after his family yacht, the “Twin Dolphin.”

Shortly after opening for business, this secluded Mexican destination became a private hideaway for Hollywood A-list starts like Elizabeth Taylor, Sophia Loren, Lucille Ball, Bing Crosby and John Wayne.  Also, the wives of Halliburton Sr.’s social circle found it “only fair” to enjoy the splendor of the Hotel Twin Dolphin equally as often as their husbands frequented the resort for the abundant fishing.

The Hotel Twin Dolphin was an exclusive 50-room resort, that offered the finest in seaside luxury – minus televisions and telephones.  Over time, it became less popular as Cabo San Lucas, Mexico, grew into one of the greatest tourist destinations in the world.  Therefore, the hotel closed its doors in 2006 and the buildings were completely demolished.

The secluded Santa Maria Beach, in front of Montage Los Cabos, is in a cove containing many beautiful natural attractions.  And, it was awarded the international Blue Flag certification, which signifies the highest-possible environmental and water-quality standards.

Montage Los Cabos is located along the Golden Corridor on the Sea of Cortez.  This is a spectacular coastline nestled between Cabo San Lucas and San Jose del Cabo.  And Los Cabos encompasses this entire region at the southern tip of Baja California, Mexico.

Many Americans, Canadians, and people from other countries make Los Cabos, Mexico, their home or vacation home.  Therefore, contact Nick Fong to uncover how to purchase your dream home near Land’s End.  Also, to uncover information about the wonderful houses and condos available in Montage Los Cabos, just click MONTAGE.

Nick Fong is the top Real Estate Broker in Los Cabos.  He’s been featured twice on HGTV’s Beachfront Bargain Hunt.  So, be sure to check out his two episodes for your self:

Thank you for reading Montage Los Cabos: Experience tranquility along the Golden Corridor, written by Greg Hixon.  Be sure to check out other posts about Los Cabos on Nick Fong‘s blog at Blog.LosCabosAgent.com.  There, learn about the many wonderful aspects of Los Cabos, Mexico, from blog posts like this.