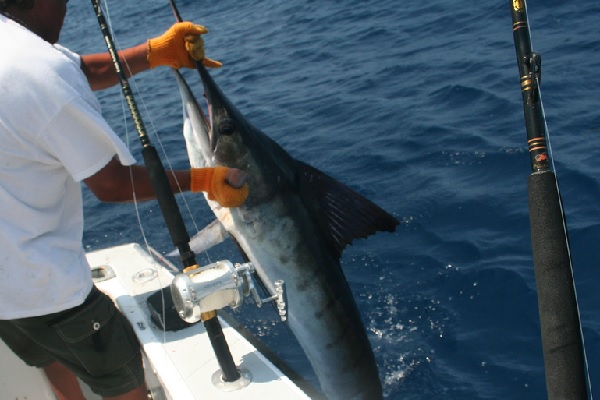 Los Cabos, which includes Cabo San Lucas and San Jose del Cabo, is a world-famous sports-fishing mecca.  It’s on the southern tip of Baja California Sur, Mexico.  There, you’ll find many world-renowned Los Cabos fishing tournaments to choose from, year-after-year.  And, there are three fishing tournaments that draw the best sports fishermen from around the world, all hosted by Bisbee’s.

Before tourism exploded in Los Cabos, the southern tip of Baja California Sur was dotted with tiny fishing villages.  That’s due to the rich waters where the Pacific Ocean meets the Sea of Cortez.  This is home to great quantities of black and blue marlin, tuna, dorado, wahoo, and many more species.  In fact, the Sea of Cortez is the most biologically diverse body of water on Earth.  To explain, it supports over 900 varieties of fish.

Unfortunately, Bob Bisbee Sr., the founder and patriarch of the Bisbee’s Los Cabos fishing tournaments, has peacefully passed away on June 14, 2018 in the north Dallas Metroplex, leaving behind a legacy, a loving family and a huge circle of friends.

Held in July, this Los Cabos fishing tournament is the season kickoff for many anglers.  Back in 2012, there were 61 teams and 350 anglers competing.  And, the top fish was a 262lb yellow-fin tuna, which set a new record.

Bisbee’s Los Cabos fishing tournaments quickly became very popular.  Therefore, a third event was created back in 2002, called Los Cabos Offshore.  This one is nick-named the “Little Bisbee’s.”  And, it’s more of a social event full of camaraderie, where old fishing buddies reunite, share stories and spend a few days warming up before that final event, the big daddy of the them all…Bisbee’s Black and Blue…five days of the most thrilling sports fishing in the world. 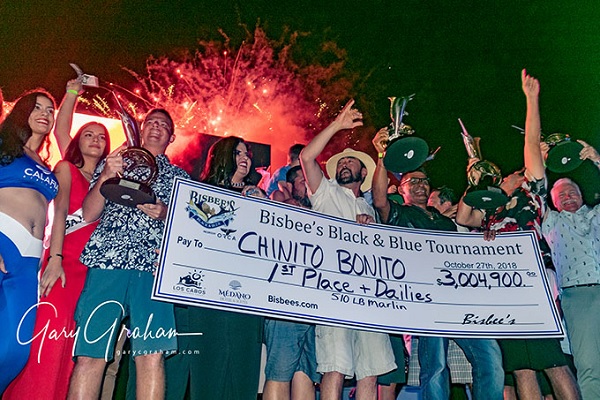 Taking place at the end of October, this is the last Los Cabos fishing tournament of the series and is the most prestigious of the them all.  It offers the highest winnings of any sports-fishing tournament in the world.  And, it attracts some of the best boats with some of the biggest names in fishing.  These fishermen have very deep wallets and usually enroll in all tournament options across the board, often paying $60,000 or more in entry fees and calcuttas (daily jackpots).

There’s good news for those who can’t afford multi-million-dollar yachts loaded with every electronic option and top-dollar equipment.  So far, more Los Cabos fishing tournaments have been won by “normal” people than by high-rollers.  And, you can charter a good boat, with a great captain, who will provide you with everything you need to win.

Are you interested in Los Cabos fishing, but don’t own a multi-million-dollar yacht?  I have more good news for you!  You don’t have to be an experienced angler to catch big fish near Cabo San Lucas.  In fact, you don’t need to know a thing about Cabo San Lucas fishing to be highly successful.  So, how can such a claim be made, you ask?  Check out Cabo San Lucas Fishing: The Angler’s Lowdown to see the how.

Each tournament has an early-bird drawing.  And, the winner of the drawing receives a free entry to the following year’s tournament.  So t o qualify, your paid base entry must be received by the deadline, which is the same date every year.  And, the earlier you enter, the more chances you have to win.  For example, if you enter the Black & Blue in August, one chip is thrown into the pot.  Even better, if you enter in July, you get two chips.  In June, you receive three chips, and so on.  The free entry is good for the following year only and is non-transferable.

The basic entry into the tournament costs $1500.  Entry into all of the competitions brings the cost up to $12500.  Prizes are awarded to individual participants and teams.  And, winnings are paid out for marlin and other game-fish species.

Daily jackpots for the largest fish in each division are called calcuttas.  They’re awarded every day of the tournament.  And, after you’ve paid your entry fee, you have the option of buying into a wide variety of calcuttas for the biggest tuna, biggest dorado, biggest wahoo, biggest billfish, and so on.

Thank you for reading Los Cabos fishing tournament: Join Bisbee’s Black and Blue to win BIG, written by Greg Hixon.  Be sure to check out other posts about Los Cabos on Nick Fong‘s blog at Blog.LosCabosAgent.com.  There, learn about the many wonderful aspects of Los Cabos, Mexico, from blog posts like this.

← Todos Santos: A Mexican oasis of palms & fruit trees where desert meets the Sierra Laguna mountains
Rancho San Lucas: The resorts and communities within a community →