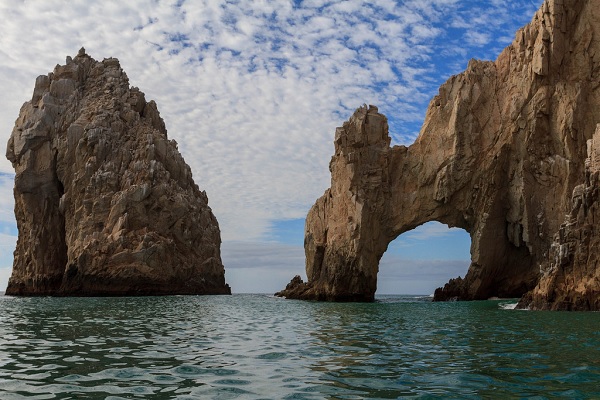 Come to Cabo San Lucas, Mexico, to “Lands End,” where the Pacific Ocean meets The Sea of Cortez.  When you get here, you’ll discover a beautiful rock formation with an arch named “El Arco de Cabo San Lucas.”  And in English, this means: “The Arch of Cabo San Lucas.”

Read on to discover all the many awesome features you’ll find at El Arco de Cabo San Lucas.  Also, uncover a little history about Baja California and the Sea of Cortez.  So, let’s begin!

Historically, El Arco de Cabo San Lucas was known as the end of the world.  This is because there is nothing but ocean to the south – it’s located at the southern end of Mexico’s Baja California Peninsula.  Also known as a cape, this awesome limestone rock formation is awe inspiring when you approach it.  And, when you look beyond it to the south, you can imagine why early settlers called this “the end of the world.”

Baja California and The Sea of Cortez

How about a little history…

Brief history about the northern Sea of Cortez

Now let’s head back down to Los Cabos…

Cabo San Lucas is part of Los Cabos, Mexico, which represents the fishing villages, now luxury tourist destinations, along the southern tip of Baja California.  When you visit, find everything you need for a wonderful vacation, all year round.

Many Americans, Canadians, and people from other countries decide to make Los Cabos, Mexico, their home or home-away-from-home.  Therefore, uncover how to purchase your dream home in Los Cabos, Mexico by contacting the top Real Estate Broker in Los Cabos:  Nick Fong, who’s been featured twice on HGTV’s Beachfront Bargain Hunt.

There are some dangers to be aware of, before you swim around this wondrous place.

Read on, and uncover where it’s safe, where it’s dangerous, and what awesome features you can expect to see around this great cape with an arch.

On the other hand, there are dangers afoot, if you ever venture into the waters of Playa Divorcio.

Playa Divorcio is great for laying on beach.  But, It’s a very dangerous place to swim.  For example, there are strong currents, crashing waves, and rip tides that can quickly pull you out to sea.  So, stay out of the water along this beach!  And beware, there are no lifeguards there.  Swimming is much safer at Playa de Amore.

Brief history about the beaches of love and divorce

There’s an old superstition, that may be true, about love and tragedy.  As the story goes:  back in the 18th century, a beautiful local woman rescued a Japanese sailor near Lands End.  They fell in love and enjoyed their time together at Playa de Amor.  But then, the Japanese sailor was rejected by her father.  So, in an act of anger, her father murdered the sailor.  Then, she took her own life by committing suicide on Divorce Beach.

Okay, now wipe your tear and put on a smile…

Next, read about the best part about El Arco de Cabo San Lucas…

When you arrive, you’ll enjoy the many sea creatures, including friendly sea lions that spend time bathing in the sun.  On your way to the arch, your boat captain will inform you about everything you can expect to see.  So, be sure to bring your camera.

Thank you for reading El Arco de Cabo San Lucas: The arch that marks Lands End, written by Greg Hixon.  Be sure to check out other posts about Los Cabos on Nick Fong‘s blog at Blog.LosCabosAgent.com.  There, learn about the many wonderful aspects of Los Cabos, Mexico, from blog posts like this.