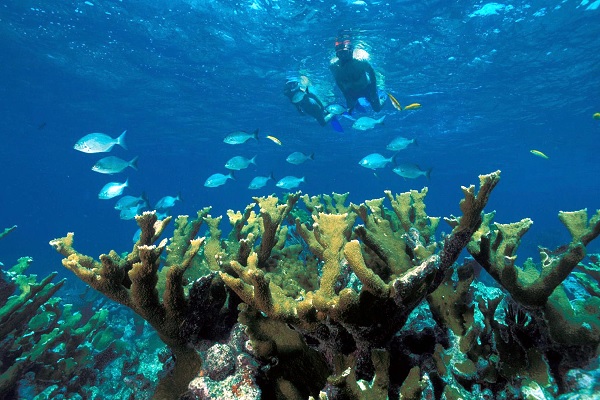 Cabo San Lucas isn’t very famous for snorkeling and diving.  Of course, there’s a simple explanation for this.  The reason is, many of the popular coastal areas are either featureless underwater or difficult and dangerous to swim.  But, there are two secret locations that I’m happy to expose for you.  And, after you uncover these secret spots by reading further, you’ll discover just how great snorkeling Cabo San Lucas really is.

Before I reveal the secret spots for snorkeling Cabo San Lucas, take a look at what you can find under the water in the Sea of Cortez…

Once called “The World’s Aquarium” by Jacque Cousteau due to its huge biodiversity, the Sea of Cortez is the most biologically diverse body of water on Earth.  To explain, it supports over 900 varieties of fish.  Also, it supports more than 2,000 species of marine invertebrates.  And, It’s home to many endemic species, which are creatures that only exist there, and nowhere else on Earth.

When snorkeling Cabo San Lucas, you’ll find many sea creatures.  The largest on the list are the migratory whales.  And, they include humpback whales, California gray whales, and even orcas or killer whales.  Then, you’ll find whale sharks.  Swimming next to these peaceful giants can be an experience of a lifetime.

The right site makes all the difference.  You need to find reefs that provide food, habitat, and cover for all of the beautiful sea creatures.  And, there are two locations that meet this criteria in Los Cabos.  Knowing where to go is the key to success.  So, read on to finally uncover these secret snorkeling and diving spots near Cabo San Lucas.

The waters in Santa Maria Cove are so clear, you can see tiny iridescent blue fish from over 50 feet away.  And, this protected, horseshoe-shaped beach is flanked by craggy rock formations, which shelter the clear waters.  Santa Maria Cove is perfect for snorkeling Cabo San Lucas – and it’s a popular place for scuba diving too.

Find everything you need for a wonderful vacation in Los Cabos, all year round!

Many Americans, Canadians, and people from other countries decide to make Los Cabos, Mexico, their home or vacation home.  Therefore, contact the top Real Estate Broker in Los Cabos to uncover how to purchase your dream home in Mexico.

Nick Fong, who’s been featured twice on HGTV’s Beachfront Bargain Hunt is ready to serve you.

Thank you for reading Snorkeling Cabo San Lucas: The secret diving spots are finally EXPOSED!, written by Greg Hixon.  Be sure to check out other posts about Los Cabos on Nick Fong‘s blog at Blog.LosCabosAgent.com.  There, learn about the many wonderful aspects of Los Cabos, Mexico, from blog posts like this.

← The Giggling Marlin: Come see the original bar and grill in Cabo San Lucas
Waldorf Astoria Los Cabos Resort at Pedregal is where your bliss begins in Mexico →