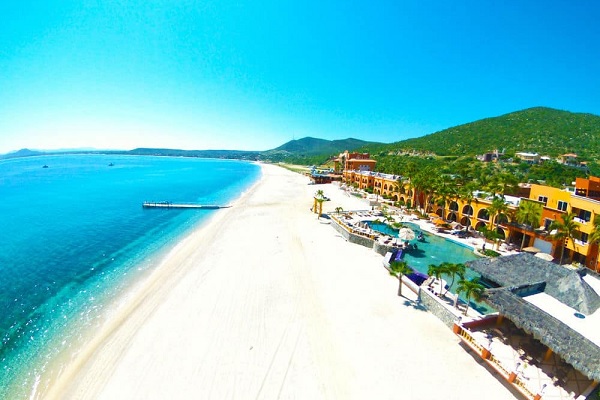 From San José del Cabo to Los Barriles, East Cape is a popular destination for those seeking a rustic beachfront destination.  There, you’ll find pristine white-sand beaches with world-class diving and fishing conditions.  And, the unpaved road leading to the East Cape is one of the most scenic drives in all of Cabo.  Better yet, this dirt road passes dozens of deserted or almost-deserted beaches for those who crave privacy and solitude.

In some places, the East Cape coastline is quite wild and secluded.  And, along the way are some well-hidden beaches that may entice you.  While you explore this untouched region, you’ll feel as though you own the place.  To explain, some of these white-sand beach areas allow for limitless dress codes, if you catch my drift.  The one warning worth mentioning is to avoid deep-sand sections while driving.  Getting stuck there can end up being a long pit stop until you find someone to help get you out.

East Cape tourism began in 1952, when the Rancho Buena Vista Hotel opened as a fly-in fishing resort.  There, a runway was built right next to the hotel. After opening, Rancho Buena Vista Hotel became a regular vacation spot for the Hollywood stars like Bing Crosby, John Wayne, and Chuck connor.  Also, President Dwight Eisenhower frequented this secluded hotel.  Then, as word spread about this beautiful remote destination, the East Cape area quickly grew in popularity.

Currently, this historic hotel is a great place to stay for those who prefer a more rustic experience.  Although there is an attractive bar to enjoy great cocktails on the beach, there is no restaurant at this location.  But of course, the views are magnificent, and the location is full of tranquility.  Therefore, this is a great location for those seeking to vacation off-the-grid.

Fishing was the original tourist attraction along East Cape.  And, this region remains popular among skilled anglers.  For example, Punta Colorada, which is perched above the surf overlooking the Sea of ​​Cortez, is known as the “roosterfish capital of the world.”  Then, Bisbee’s East Cape Offshore tournament is a summer tradition in Buena Vista.

Snorkeling and diving are also spectacular along the East Cape, particularly at Cabo Pulmo.  This national marine sanctuary is home to eight fingers of live coral reef.  And, because of its protected status, Cabo Pulmo now boasts the highest concentration of marine life in the Sea of Cortez.  Also, once called “The World’s Aquarium” by Jacque Cousteau due to its huge biodiversity, the Sea of Cortez itself is the most biologically-diverse body of water on Earth.

To see the real-estate options available along the East Cape region, click <HERE> to see the current listings.

Thank you for reading East Cape is for those seeking a more rustic beachfront Los Cabos destination, written by Greg Hixon.  Be sure to read other posts about Los Cabos on Nick Fong‘s blog at Blog.LosCabosAgent.com. There, learn about the many wonderful aspects of Los Cabos, Mexico, from blog posts like th