Carnival Miracle is coming back to Cabo San Lucas 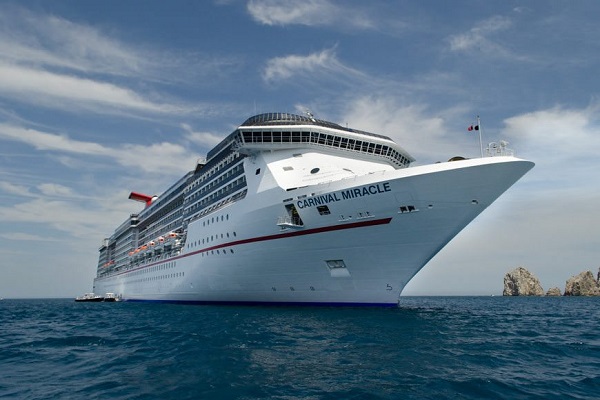 Find exciting Cabo San Lucas shore excursions offered by Carnival Miracle.  In fact, there are 25 different excursions in Cabo San Lucas to choose from.  These range from Jeep adventures to zip-lining and swimming with the dolphins.  And, these excursions determine which order you can disembark the ship for your day ashore.  So, you get to be one of the first people off the ship after Carnival Miracle arrives in Cabo.

Back in September of 2014, Carnival Miracle delivered several tons of relief supplies to Cabo San Lucas in the aftermath of Hurricane Odile.  Dozens of pallets were offloaded from the ship.  To break it down, they contained bottled water, non-perishable food and toiletries.  Finally, the supplies were delivered to public-assistance agencies to help those in need.  Now, local residents are happy to see the return of Carnival Miracle to the port of Cabo San Lucas.

By design, Carnival Miracle is one of Carnival’s most comfortable ships.  It blends friendly, well-trained crew with an optimized layout that minimizes crowding.  And speaking of crew, there are over 900 crew members that cater to the ship’s 2,124-passenger capacity.  Also, public areas provide for a great passenger-traffic flow.  And, the well-organized Lido Deck efficiently thins-out crowds if they start to form.   Last, find two promenade desks that add even more space to keep crowds at a minimum.

Find additional features like 12 decks, several lounges, various restaurants, fun water-slides and many other splendid amenities.  And, one of the pools has a retractable roof, which allows the area to be used in rainy or cold-weather conditions.  Then, there are many cabin balconies.  To be specific, 64 percent of the cabins have a balcony.  This is a great increase as compared to the other ships in the Carnival fleet, which provides under 50 percent of cabins with their own balconies.

Renovations were underway long before Carnival Miracle was dry-docked.  To explain, it was receiving new venues and shows through a program called Fun Ship 2.0.  Two of the additions were RedFrog Pub and the pharmacy-themed Alchemy Bar.  Then, two more additions included a new sports bar and a candy store called Cherry on Top.  Next, the ship was outfitted with four new production shows.  Also, the Dr. Seuss-themed kiddie program called Seuss at Sea was added.  Finally, Hasbro, The Game Show, which is an audience-participation act, is now part of the program.

Thank you for reading Carnival Miracle is coming back to Cabo San Lucas, written by Greg Hixon.  Be sure to read other posts about Los Cabos on Nick Fong‘s blog at Blog.LosCabosAgent.com. There, learn about the many wonderful aspects of Los Cabos, Mexico, from blog posts like this.