Cabo Real golf is right up your fairway in Los Cabos, Mexico 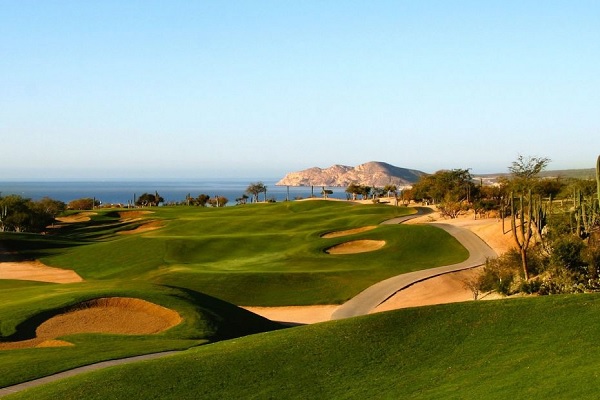 Are you ready to visit a world-renowned golfing mecca?  If so, come to Los Cabos.  This is an area located on the southern tip of Baja California.  It includes Cabo San Lucas, San Jose del Cabo, and the Golden Corridor stretching between these beautiful Mexican towns.  There, you’ll find some of the best golf courses in the world.  And, if you enjoy watching whales breach while taking in spectacular views of the vibrant Sierra de la Laguna mountain peaks, then Cabo Real Golf Club is right up your fairway.

The Cabo Real golf course is a multi-themed, target-style golf course that meanders through scenic cactus-lined canyons and hilly terrain.  It flows all the way down to the fifth hole on the beach, where the desert landscape meets the beautiful Sea of Cortez.   Also, the Cabo Real golf course features rolling fairways with strategically-placed free-form bunkers within narrow terrain leading up to the 16th tee, which is 460 feet above sea level.  Breathtaking!

First opening in December of 1994, the Cabo Real Golf Club is home to a championship golf course designed by Robert Trent Jones Jr.  The Cabo Real golf course had gained worldwide recognition right away.  Then, it hosted the 1996 PGA Senior Grand Slam.  And during the competition, whales were breaching on live television right off shore.  That was an amazing moment indeed.

The first six holes on the back nine are nestled within the spectacular mountainous terrain of the surrounding Sierras.  And, you can immerse yourself with ocean, desert, and mountain views from every hole of the Cabo Real golf course.  Also, there are nine spectacular beachfront holes along Cabo Real Golf Club’s three-and-a-half miles of Sea of Cortez coastline.

To anticipate the wind, uphill holes usually play downwind while downhill holes almost always play into the prevailing onshore breezes.  The front nine provides broad fairways that work their way down to the Sea of Cortez, notably at the short par-four fifth hole.  Then, the par-three sixth hole lays against a beautiful seaside bluff.  From the sixth hole, look behind you to reward yourself with a wide view of countless palm trees and the beautiful sandy beach along the sea.

Next is the 14th hole, at 454 yards, which runs along the edge of a steep canyon.  It takes you up to a green that is sculpted into a ridge at the highest point of the course – almost 500 feet above sea-level.  Then, the short par-four 17th hole was created with nice clean lines, punctuated by two large bunkers and a picturesque sentinel cactus. From an elevated tee, the burly par-four 18th hole is a classic finishing hole.

Thank you for reading Cabo Real golf is right up your fairway in Los Cabos, Mexico, written by Greg Hixon.  Be sure to read other posts about Los Cabos on Nick Fong‘s blog at Blog.LosCabosAgent.com. There, learn about the many wonderful aspects of Los Cabos, Mexico, from blog posts like this.