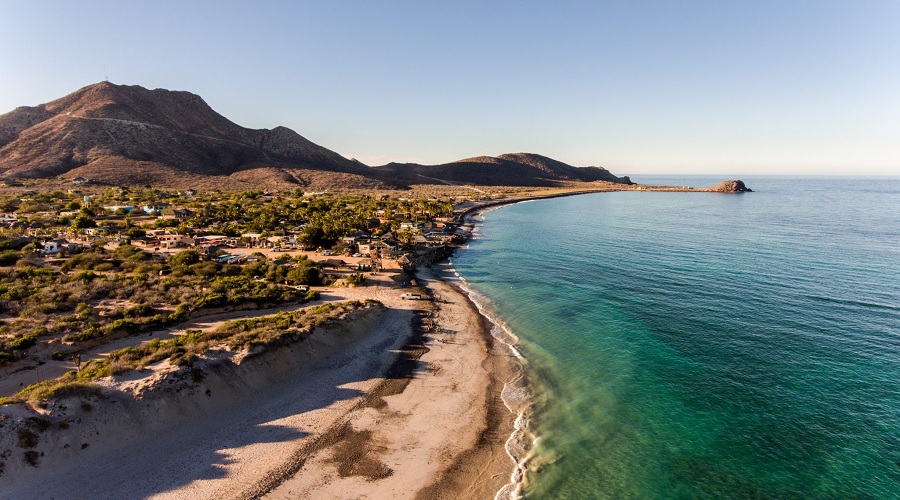 From the many wonders that the Sea of Cortez has to offer, there’s a stunning nest for marine biodiversity called the Cabo Pulmo reef.  This ecological treasure is home to many of the species inhabiting the Sea of Cortez.  In this post, learn more about exploring the Cabo Pulmo National Park.  Then, check the proper way to visit this place and how to get there.  You just have to keep reading!

Cabo Pulmo National Marine Park is on the east coast of Baja California.  This ecological wonder spans 62 miles between Pulmo Point and Los Frailes Cape.  Bahía Pulmo is home to the oldest of only three coral reefs that you can find on the west coast of the entire American continent.  This reef boasts hard coral fingers from rock outcroppings near the coast.  And, this area became a national park in 1995.  Then, it became a UNESCO World Heritage site in 2005.  After becoming a well-protected site after many years of overfishing and exploitation, it has now grown in flora and fauna more than double what it used to be.  You can find there a flourishing ecosystem with an amazing variety of unique endemic species.

Cabo Pulmo it’s a great place to visit all-year-round.  Although, the best time to visit Cabo Pulmo is between July and January.  During this time, the north winds aren’t blowing very hard and the water keeps a warm steady temperature of 75-80° F.

The diversity and abundance of marine species in the Cabo Pulmo reef are mainly because it’s in a very special area where warm and cold waters converge.  The tropical Sea of Cortez and the gelid arctic waters meet in this diverse nest of aquatic flora and fauna.  This place is home to more than 200 species of fish and ten species of stony corals.  Added to this, it gets the constant visit of large mammals such as the humpback whale, dolphins, and sea lions.

You can access the Cabo Pulmo National Park via a dirt road 16 miles north of La Ribera.  La Ribera is a small town part of the municipality of Los Cabos, with a population of close to 2000 people.  This place is home to fishermen, workers from the nearby resorts and a small number of ranchers and farmers.  The town is the closest to Cabo Riviera and is part of the “East Cape”.  Also, this beautiful community is located only a 50 minute drive away northeast from the Los Cabos International Airport in San José del Cabo.

A jewel in Baja California Sur, this hideaway it’s a unique place that prides itself on conservation, limiting human impact and respecting nature.  A unique opportunity to get close to nature, bringing out your adventurous side.  You’ll find in the village a selection of campsites, basic accommodations, and just a few high-class rooms.  The village runs with solar electricity and well-water.  There are only 4 restaurants in the area and a very limited number of food shops.  Therefore, plan in advance what you might need when visiting this incredible place

You can plan a day trip from Cabo San Lucas, San José del Cabo or even La Ribera to dive into the Cabo Pulmo reefs.  Organize the trip yourself if you’re an experienced diver or plan with a dive company if you’re a first-timer!

Two of the recommended reefs to explore are, firstly:  The islet, which is located south of the bay of Cabo Pulmo, it has a maximum depth of 60 feet.  You’ll find yourself impressed by the intense colors of the marine life vividly moving around this promontory of the reef.  Moreover, the Arms of the reef that are located in the middle of the bay, will overwhelm you with an abundance of wildlife.  The reef walls are covered with different types of green and golden colors.  Tons of tropical fish also come and go through the reef, showing their intense colors.  Among the rocks, you can see emerging hedgehog and blowfish.  In the sandy bottom, buried rays are common too.  Definitely, an experience you wouldn’t like to miss!

Many Americans, Canadians, and people from other countries choose to make Los Cabos, Mexico, their home or vacation home.  So, discover how to purchase your dream home in Los Cabos, Mexico by inquiring with the top Real Estate Broker in Los Cabos: Nick Fong, who’s been featured many times on HGTV’s Beachfront Bargain Hunt.

Thank you for reading Explore the Cabo Pulmo National Park when you visit Cabo San Lucas, written by Greg Hixon of RE/MEX Image.  Be sure to read other posts about Los Cabos on the Los Cabos Agent blog. There, learn about the many wonderful aspects of Los Cabos, Mexico, from blog posts like this.

← Los Cabos Hot Springs: Uncover these hidden gems that bubble up from the deep
Discover the best places to watch the Cabo sunset →